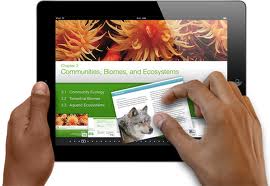 (WAVY-TV 10) – The Isle of Wight school system will be spending nearly half a million dollars for three years on iPads to replace old textbooks.

“Our students are accustomed to this digital age,” Smithfield High School Principal Stenette Byrd said. ” They are very knowledgeable of electronics.”

According to the school system, new textbooks haven’t been purchased in more than five years, and now, 2,000 iPads will take the place of traditional books.

By having electronic textbooks, it’s going to give our students current information as it’s updated,” Director of Instructional Technology for the schools Lynn Briggs said.

“When we did the figures, we found that we were able to get an iPad for the costs of four textbooks for their four course subjects,” spokesperson for the school system Kenita Bowers said.